Santa Cruz California: It’s as close as NorCal comes to having a real beach. 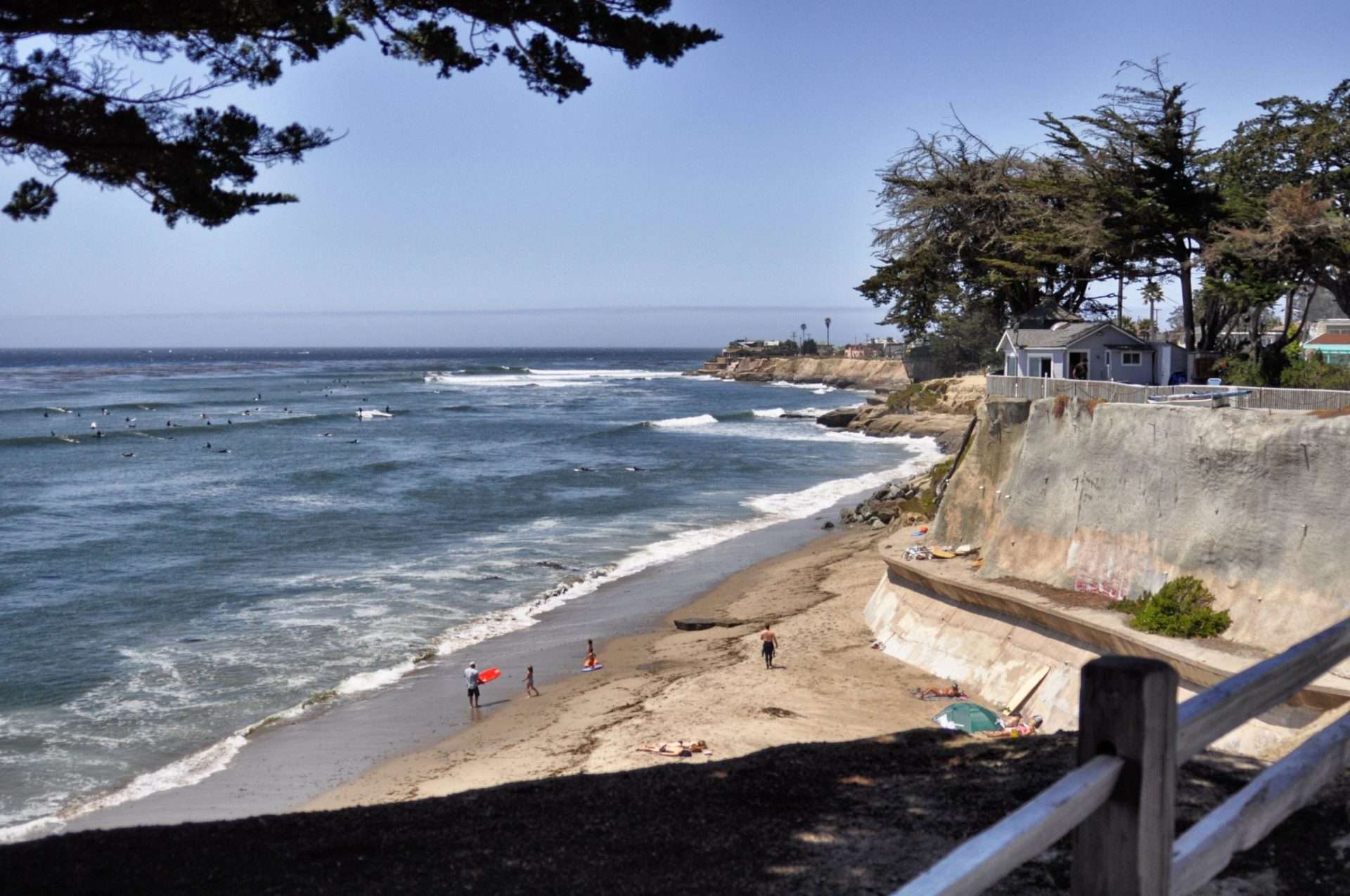 If someone kidnapped you, drugged you and dropped you in Santa Cruz California — naked and penniless — it’d be months before you’d look out of place (if ever). Not that Santa Cruz has a drug, homeless or naked person problem. It’s just that Santa Cruzians seem to hate shaving, haircuts and pants.

Recently, my wife and I were faced with a weekend sans plans and a dearth of disposable income, so we packed up our vehicle and headed south on Route 17. After a brief hour-long drive, we arrived in Santa Cruz California.

Principally known for its tacky boardwalk, its Fighting Banana Slugs, and the annual Mavericks Invitational surfing tournament, Santa Cruz is the nearest real beach town of any size in the NorCal area. Like most good beach towns, the vibe is casual and relaxed (much like the dress- and hygiene-code).

Santa Cruz isn’t in the hot part of California.

But unlike most good beach towns, the air and water temperature in Santa Cruz are usually freezing. Northern California has the terrible combination of burning hot sun and frigid 55-degree air. Sometimes, the combination fights it out and you get a warm, pleasant day that you can spend sunbathing in a swimsuit. More often, though, you get a cold, miserably sunny day that you spend wearing full-body wetsuits or heavy fleece. Frankly, the weather in NorCal is just plain wrong.

Regardless, figuring that if the weather sucked we could at least get a massage, we booked a reservation at Chaminade, supposedly one of Santa Cruz’s finest “resorts and spas.”

Unfortunately, that wasn’t really saying much — the place was nice, but not amazing. Oddly, it wasn’t even near the beach — it was decidedly inland and way up on a hill.

For a view of the beach, you either needed binoculars or to stay somewhere like the Dream Inn. (We biked past it later and stopped in but were instantly glad we didn’t stay there. Normally, we like Joie de Vivre hotels a lot, but the pool area was congested with super noisy, snot-nosed kids, so we would’ve hated staying there.) By contrast, the Chaminade pool was silent and peaceful. Well, at first.

Soon, people with families arrived and it all went to hell. In no time, they were everywhere. In the hallways. In the pool. Even in the lobby. It was a full-on kid infestation, aka a kidfestation™ — hey, that’s trademarked now!

Children entirely ruined our relaxing pool experience on the second day by swimming and splashing as if they had been raised in the Gobe desert. Their innocent, child-like glee and unfettered excitement was entirely unbearable. At the prices we were paying, this kind of youthful enthusiasm was unacceptable.

We were genuinely disappointed by the establishment’s tolerant acceptance of ebullient rug-rats. Especially since the walls of the Chaminade were so thin we had to ask to be moved to another room to escape the cacophony of children enjoying themselves in the next room.

Luckily, not all of Santa Cruz is so kid-tolerant.

In an attempt to avoid any more cheerful kids, we went to dinner at Oswald’s, a swanky, adult-friendly place in downtown Santa Cruz. We sat at the bar because the place was jammed with people who were probably also avoiding children.

Though the food was great, the drinks were clearly the star and in no time we were once again “happy.”

The next morning arrived surprisingly fast, so we went for breakfast. While I waited for a table at the ridiculously popular Cliff Café, my wife ran over to Verve Coffee for her caffeine fix. The Cliff Café is a local breakfast joint with amazing pancakes and fresh omelets that doesn’t take reservations or credit cards, so bring cash and a catheter. Luckily, the food was worth the extraordinarily long wait.

All fueled up on carbs, we rented bicycles at Family Cycling Center on 41st Street and took off for parts unknown (also known as the beach).

We headed south to East Cliff Drive and rode west on a mostly paved path that then became a road with a bike-lane and then just a road, and then a bridge sidewalk, and then a road again. Once, for just a moment, it became a butterfly.

We biked past Shadowbrook and The Crow’s Nest, two highly recommended restaurants, but didn’t go in either one because, as I said, we were on bikes and your better restaurants frown on getting tire-marks on their flooring. The trolly ride cart thingy at the top of Shadowbrook is apparently cool and a “must do” that we didn’t.

Overall, our ride wasn’t the pleasant, relaxing bicycle ride we’d hoped, but eventually we got tired and stopped at the Dream Inn for lunch. There, we were mostly ignored and served subpar food before being charged exorbitant and unwarranted prices — the bottled water, however, was delicious. If you’re in that part of town, we’d recommend Café Brasil instead. The wait here was worse than at the Cliff Café, but again, the food made it worth having to sleep in the parking lot overnight.

We bicycled back towards our car, past the Santa Cruz Boardwalk which was overrun by tourists and locals enjoying the sunshine and fried foods.

Traffic was thick and motionless in all directions — a vivid reminder of why we didn’t want to stay anywhere near the place. Soon back on 41st Street, we had fantastic burritos at the Chill Out Café and then returned our bikes none the worse for wear.

Being fairly wiped out from our long ride, we had dinner on our final night at the restaurant inside the Chaminade Resort and Spa.

Or, to be more specific, outside on their stone terrace. Their terrace overlooked a vast, grass-covered and tree-lined property beyond which you could just barely see the ocean.

The food, drinks and service at Chaminade were, pleasantly, excellent. So, too, was the atmosphere out on the deck. Even the rapidly plummeting temperature was nicely mitigated by the fire-pit burning in the middle of our table. And since we didn’t have anywhere to drive afterwards, we drank like alcoholic fish.

In all, we had a good time in Santa Cruz and will probably go back soon, but we won’t stay at the Chaminade (we’ll probably just eat and drink there). Instead, we’ll do what the locals do: stop shaving, take off our pants and sleep on the benches.