Rome Italy: The cradle of civilization (and toga parties). 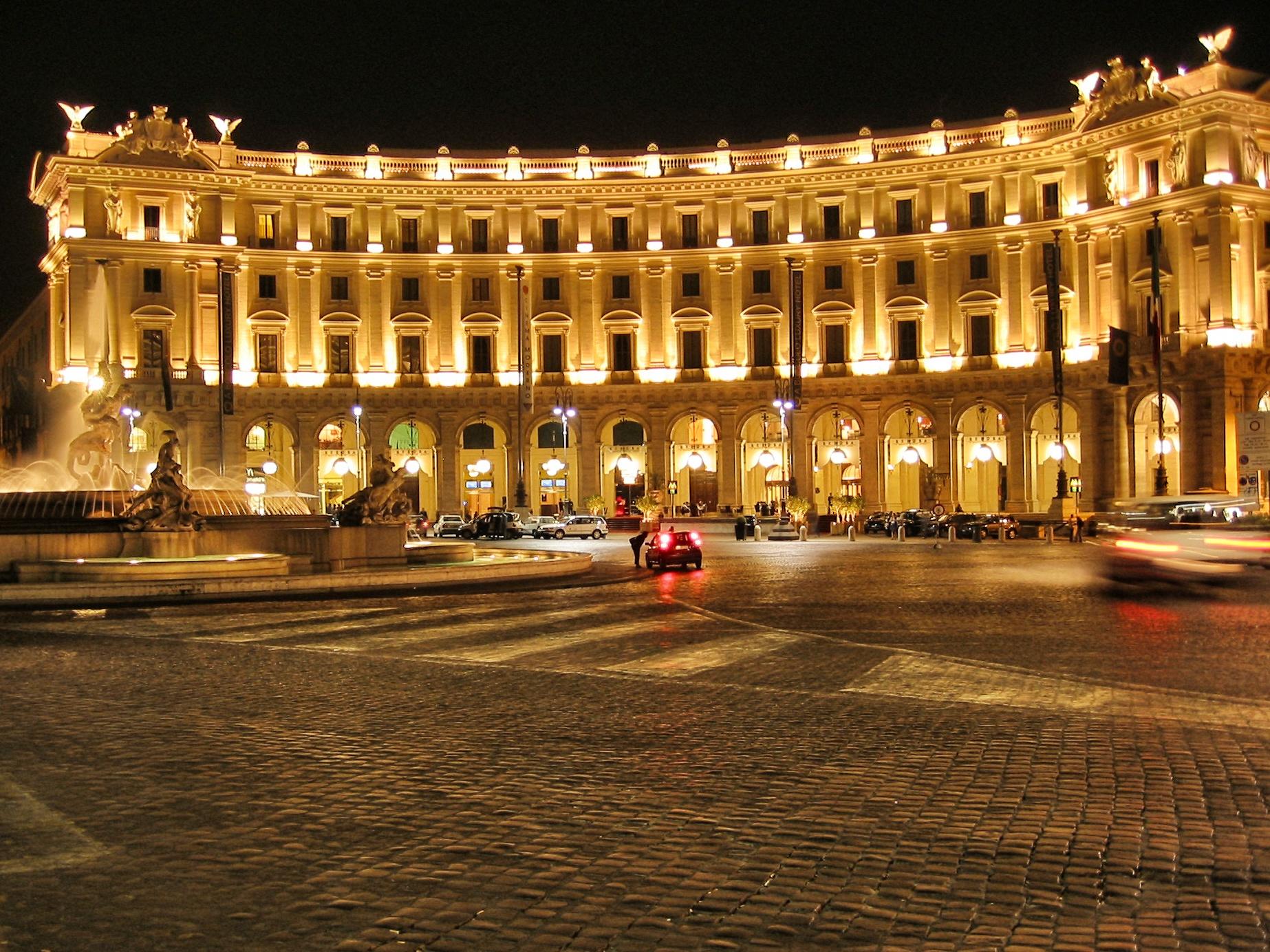 We boarded a huge Boeing 747 headed to Rome Italy and crammed with what looked like the entire U.S. population of octogenarians. We found our seats and flew to our destination, figuring, “What more harm could another plane full of self-important Mid-western hicks do to America’s already sagging popularity overseas?” And we soon found out.

Rome Italy was once the greatest city in the world.

The cross-country flight to Rome Italy went off without a hitch—assuming you don’t consider the scheduled stop in Newark, a hitch—and we arrived at Leonardo Di Vinci airport around 8am the next day. The flight lasted a quick 15 hours, but we lost a night somewhere, probably going through Newark security—those TSA guys are light-fingered.

Everything in Rome Italy makes noise.

Entering Roma, the first thing you notice is the street noise is deafening. Everything is loud in Roma. But not an angry loud. Kind of a happy loud. Everything, it seems, is a reason to honk. Scooters, cars, you name it. If it’s got a horn, they’re using it. Roma makes NYC seem like the crowd at a Yanni concert.

Dragging our bags to our room at the Hotel Dolomiti, we did what most Californians do in Rome—we slept—for four hours.

I have the best pizza of my life.

Then we ate at the nearby Florian’s Café, a coffee shop inside an historic building designed by Giulio Monteverde, where I had the best pizza of the whole trip (Buffalo mozzarella and roma tomatoes, mmm).

After recovering most of our lost sleep, we got up and dragged ourselves to The Vatican, home to that big-hatted Pope guy. Vatican City is, for tax reasons undoubtedly, its own country, complete with its own stamps and a Post Office that’s better than Italy’s own (the stamps say, “Deliver this letter fast, or burn in hell!”).

We arrived by bus at 8am, before throngs of the guilt-ridden showed up. The front gate seemed intended to impress believers with the “glory of God” or something, but all it did was highlight the Church’s astounding corruption, manipulation and abuse of power that paid for it all. Especially St. Peters’ Basilica. You don’t find marble columns like that at your local Home Depot.

St. Pete’s Basilica is a big, ostentatious church with some serious adequacy issues. The floor actually has marks that indicate where other “lesser” churches fall short. Talk about an insecurity complex. I’m surprised the Pope-Mobile doesn’t have a bumper-sticker that says, “My basilica is bigger than yours.”

We then had some difficulty finding the Villa Borghese museum inside Borghese park despite having three different maps of the place. It went a long toward explaining why Italian-explorer Christopher Columbus found America when he was looking for a route to India.

Simply put, Italian maps suck. After following roads that splayed in every direction (except those indicated by the maps), we ended up finally finding the place entirely by accident.

The original sculptures and paintings in the Borghese Gallery date back to Cardinal Scipione’s collection (son of Ortensia Borghese), and include works of ancient, Renaissance and contemporary art.

Inside, the museum limited us to 2 hours, and a measly 30 minutes in the Picture Gallery, hoping to force tourists to buy a book in the bookstore to see what they’d missed. (FYI, the audio tour sucked.)

South of the Burghese Palace is Vio Vento, a swanky thoroughfare much like Rodeo Drive in Beverly Hills. Lined with luxury hotels and pricey sidewalk cafes, it was one of the only wide boulevards we encountered in Roma. At the end of Vio Vento, it opened up into yet another piazza with a fountain by Bernini (he worked a lot).

The word Pantheon means “across religions.”

The Pantheon was next on our To-Do list, as we wanted to see this marvel during the day when we could go inside. The original Pantheon (meaning “shrine of all the gods”) was completed in 27 BC.

Yet even without ready access to hardware stores, building materials and power tools, the Ancient Romans still managed to erect a domed roof 142 feet high, a feat even more impressive when you consider the Tower Crane hadn’t yet been invented.

Sadly, this testament to human imagination and achievement was ultimately co-opted and bastardized into a church by Catholics intent on clearing up any notion that about which god the live-and-let-live Pagans would henceforth be tithing unto.

The Ancient Catholics had taken a tall, majestic stone obelisk (brought by Caesar after defeating the Egyptian armies) and had screwed a cross affixed to its top. A freaking CROSS! On a classical Egyptian obelisk! That’s like covering the breast on America’s “Spirit of Justice” statue.

And if that weren’t enough, they destroyed some classical structures of Emperor Nero Claudius Drusus Germanicus’s mausoleum, and then built not just a single, but twin churches atop the rubble (as if only one church wouldn’t have cleansed the stink of the heretic).

Later, the Metro stop dropped us off on the far side of Circus Maximus, the very same place Charlton Heston raced chariots. The place has since, quite frankly, gone to hell.

Overrun with grass and weeds, the Circus Maximus is more like a circus parking lot, a shell of its former greatness. And by “shell,” I mean, jogging track. Instead of donning suits of armor, people don striped velour running suits. Not exactly the same, really.

Welcome to the Roman Colosseum.

“Live from the Flavian Amphitheater!” just doesn’t have the same ring as “The Colosseum.” No wonder it never caught on. The Flavian let the first 50,000 citizens through its doors in 80 A.D. Over the next 1,923 years it has begun to—and I’m being charitable here—deteriorate.

One of the most impressive structures ever built in the history of mankind has been left to rot like an Appalachian outhouse. Fortunately, the Flavian is currently being refurbished. One can only hope that, when finished, they’ll once again resume throwing Christians to the lions. Now, that’s entertainment.

Next, we hit Palatine Hill (basically translates as Palace Hill), where each succeeding Emperor sought to outdo the previous Emperor’s pad. It was supposedly where the city of Rome Italy was founded.

It offers some great views of the Fori Imperiale (Imperial Forums), and is a nice place for picnicking or hiding a body, but little else.

We moved on to the church, San Pietro in Vincoli (St. Peter in Chains), which houses Michelangelo’s “Moses” statue, one of forty-two figures slated for an impressive, but never completed, mausoleum for Pope Julius II. The Pope kicked before it was done and so, without funding, Michelangelo bailed on the project.

Nero was a kinky little weasel.

Nero’s Golden Palace (Domus Aurea), so called because parts were overlaid in gold leaf and embedded with gems and seashells, was truly nuts. Construction started after the great fire of Rome, leading people to believe he purposely let the fire spread to clear the land. The entire place was cleverly designed to allow light into every room, so Nero could see his orgy’s participants.

The grounds of Nero’s palace included pretty much all of the current Rome Italy (back then, it was just a lake) including the Colosseum, causing one person to write “One house took up the whole city of Rome.” — Liber de Spectaculis 2.4.

The Vittoriano isn’t an actual building, it’s a front.

The Vittoriano, though, is nothing short of amazing, staggering in both size and scope. Built up the side of a steep hill, this monument dedicated to Vittorio Emanuele II of Savoia—the first king of Italy—is a daunting climb, but the cooling breeze at the top is totally worth it.

The building is obscene in its grandeur; 100-foot soaring ceilings and endless marble steps dwarfs all reason. The project started by G. Sacconi in 1885 and was completed a mere fifty years later. Do not miss it.

Finally, we found ourselves at the Fori Imperiali, or Imperial Forums. No longer the equivalent of Roma’s largest shopping mall, The Forum is now a shattered and strewn collection of what’s left from Rome’s ancient Republic period.

It’s comprised of half-broken columns, looted and ransacked structures that sadly resembles its former glory, not in the least. On the upside, the entire area was closed off on May 11th, the night we were there, for a free Paul McCartney concert.

A short train ride later found us in Florence.