Palm Springs, California: Now we can say we went there. 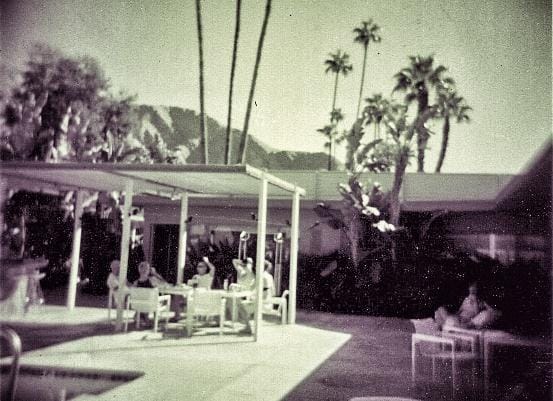 The first thing we noticed as we pulled into Ontario Airport (outside Los Angeles, and calling it an “airport” is being generous) was the temperature. Sixty-seven degrees F. Nearly the identical temperature we had left back in SF. A bad start since we had chosen Palm Springs for its warm, desert climate.

The first thing we noticed as we pulled into Ontario Airport (outside Los Angeles, and calling it an “airport” is being generous) was the temperature—sixty-seven degrees Fahrenheit. Nearly the identical temperature we had left back in SF. A bad start since we had chosen Palm Springs for its warm, desert climate.

We picked up our rental car—a Buick Century—and drove the hour East with little drama (With little enjoyment, as well. For a twenty-four thousand dollar car, I was very disappointed. Wobbly at highway speeds, susceptible to crosswinds, frightening brakes, uncomfortable seats, and cheap-looking interior design/materials).

Arriving at Palm Canyon resort a bit early, we were nonetheless allowed to check in. It was Thursday, May 14th, so we planned on staying home to watch the much ballyhooed Seinfeld finale. It was also the night they blocked off South Palm Canyon road and had a little street fair with food and crafts. We hit dinner at a decent Mexican place and roamed the street of talentless musicians and fatty foods. The night was cool, so we didn’t mind staying indoors to unwind with a little sitcom action.

Naturally, cable was out. Well, actually, only on ONE channel. NBC. No lie. The only channel you could get the Seinfeld finale on and the picture was messed up and the sound was out. We laughed at the irony and called maintenance who — after fiddling stupidly with the set — came to the same conclusion that we had hours before. Cable was out.

Mercifully, a half hour before 8 o’clock PST, it came back on. (Frankly, I wasn’t blown away by the final episode, but we did enjoy the irony that a show about nothing ended with the characters going to jail for exactly that. Nothing. Ah, karma, when will you learn?)

The next day, our decision to come to Palm Springs for some sun and fun was proven a good one. The sun was bright and the temperature stayed in the eighties. Jumping on the opportunity, we promptly parked our butts in some pool-side chaise lounges and absorbed both UV radiation type A and B. We could literally feel our bodies processing more Vitamin D, as our skin lost its resiliency and turned more tan and leathery. Mmmm, crispy. You don’t have to wonder why ol’ blue eyes spent so much time here they named a road after him. Tragically, Sinatra died while we were there. Palm Springs has a pseudo “Walk of Fame” where Frank’s star was the sight of many grieving fans and flowers.

We then drove out to the base of Mt. Something-or-other and took a tram from the valley floor all the way to the crest, a mere 8,000 feet above sea level. Despite the fact that the tram was Swiss-made and looked solid enough, climbing on was a prime example of Kierkegaard’s famous “leap of faith” (Oh, look it up).

Hung from thin, aging—and no doubt rusting—cables, the tram hauled 20 unwitting tourists boarded unceremoniously up the jagged face of the mountain. A total of four, evenly spaced towers provided a nice jostling for the tram car every time we passed one—not a sensation that inspires confidence when you’re dangling 100 feet above sheet rock and pointy pine trees.

After a grueling, panic-attack-ridden five-minute jaunt, we arrived at the top where an Alpine-looking lodge rested, complete with wood-beam ceiling and tacky buffet-style restaurant. Its sole saving grace was, thankfully, a bar. We walked around the paved trails at the top of the mountain in shorts, made ice-balls out of the surrounding snow (NOTE: At 8,000 feet, even a desert gets cold—Mr. Earth Science) and took pictures.

From that height, you could see all four of “the desert cities:” Palm Springs, Rancho Mirage, Palm Desert, and one other one. All flat squares on a flat plain between seriously not flat mountains. Very cool.

Before steeling up the nerve to head back down (to our death, we believed), we stopped by the bar and quaffed a “lemonade.” And by “lemonade,” I mean straight Vodka in a yellow-colored glass. The resulting buzz made the trip down considerably more fun—we got right up front, a-whooping and a-hollering the whole way down not unlike Slim Pickins in Dr. Strangelove. Once on the ground, we kissed it (okay, we Frenched it), drove back to Palm Springs, caught some Mexican (the food, not the people) and hung out for a few drinks in the warm desert night.

Saturday, we got adventurous and went to Joshua Tree national park. The park got its name from a recent U2 album. The Joshua tree itself got its name from the biblical character whom the tree supposedly resembles, stretching his arms to the sky. (Personally, that parallel is a bit of a stretch. They look more like the Scarecrow character from The Wizard of Oz.)

Basically, you drive through the park on a paved road past acres of trees and these odd piles of rocks randomly deposited throughout the park. The rock look like God sprinkled pebbles into little piles—make that really big pebbles and really big piles. Geologists who don’t subscribe to the “God-Sprinkle-Rock Theory” insist that cracks in the earth’s plates allowed lava to ooze up through and cool one rock at a time (but what the heck do experts know? A lot, it turns out.)

The result is almost comical compared to the purposeful jutting done by the nearby mountain range. But the rocks groupings are idea for something called “rock climbing.” It’s an odd West Coast anomaly where otherwise sane individuals try to ascend to the top of these lava piles with only the use of their hands and feet. Once at the top, they are met not with accolades, floral bouquets, nor sash-wearing beauty contest winners all puckered up. No, they are met with only the daunting prospect of trying to get back down. Up is the easy part. I still can’t understand why it caught on.

While at the desert park, we saw only two life forms, other than the ubiquitous Yuppies-in-a-minivan. A coyote and—wait for it—a roadrunner. I kid you not. The only thing missing was a mailman dropping off a box marked “Acme.” As we left, I fully expected to see the sky obfuscated by a big Warner Bros. logo and Porky Pig bidding us a fond—albeit stuttered—farewell.