Lost Vegas: Check your good taste at the border. For our fourth wedding anniversary (is that all?), we hopped down to Las Vegas, home of Elvis impersonators, the Rat pack and large, spectacularly overwrought mega-hotels. I’ve seen a lot of big buildings in my life, but nothing dwarfed the size and scale of the hotels on the Vegas strip.

Lost Vegas, Nevada gets its nickname from all the divorced Dads there who lost their kids.

The hotels are so big in fact, the scale is disorienting. We found out the hard way trying to get up the strip to the next hotel. What looks like a four block walk actually takes three and a half days. We missed quite a few dinner reservations because of it. Then we learned to take cabs everywhere. (Driving past the hotel next to ours to the third hotel cost ten dollars. No lie. That’s how far it is.)

Outside, the hotel architects take huge metropolitan areas like Egypt, Venice, Paris and NYC and scale them down all of 10%. Or they take small things like lions and volcanoes and blow them up 7 million percent. There seems to be no middle ground. Inside, they look like Liberace exploded. If there is ever a gold-leaf shortage, this place is the cause.

We got in Friday night and went to one of the newer eating establishments called Aureole, known for their impressive Lucite-enclosed wine tower. When you order a bottle, a young lady, who obviously drew the shortest straw that night, hitches herself into a cable rig and, through a series of pulleys, Peter Pan’s herself aloft up the back lit tower to bring down your wine in full view of the patrons. Needless to say, the women don’t wear skirts. 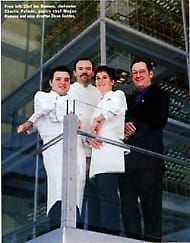 Yeah, those are all bottles of wine stacked behind them. Like most things in Vegas, it’s all show. Ooh, Ahh. (“Here’s your bottle of Mad Dog 20/20, mon suer.”)

To bolster their standing as a restaurant, Aureole has a number of bottles in the $450-$28,000 price range. That’s right, I said $28,000. For a bottle of wine. One bottle. Not a barrel. One lousy 750ml bottle of hooch. How drunk do you have to be to order that one? Donald Trump would sweat doing the math for a tip on that bill.

Frankly, they should have put more effort into the food. Neither Amy nor I was particularly thrilled with our incredibly pricey meal (the place is rated, “Very Expensive” by Wine Spectator magazine, not merely “Expensive”). But when you gamble in Vegas, the odds are with the house. We were out $200 before we even hit the casinos.

Surprisingly, the casinos at the MGM Grand were less tacky than I expected. Certainly they were expansive, covering what seemed like acres of otherwise farmable real estate. There weren’t really what you’d call hallways. Just wide, mall-width passages to other parts of the hotel crammed with slots, card tables and anything else they could think of to take your money (see story on Aureole above). I expected to find them in the john.

We played the slots for awhile and were up $20 for one day, but the next day saw that money join countless other from the optimistic suckers that believe Lady Luck would look at their unshaven, sunburned faces.

Not being huge gamblers, we took our chances in the restaurants. And did pretty well. We had a nice meal at one of Wolfgang Puck’s place. And Onda, an Italian place, wasn’t bad nor too pricey. Our one regret was that we never got to try the $12.95 all-you-can-eat buffet as we wanted to eventually eat that night. The line for it snaked around the casino like a human, well, snake.

Like Palm Springs, Vegas is hot. Fortunately, it’s the “dry heat” people always about to make you feel better about the blistering 100+ temperatures drying your bones and searing your flesh. My advice: Don’t go out in the direct sunlight during the day or you will explode.

Unlike Palm Springs, there is actually stuff to do in Vegas besides sit at the pool and complain about the heat. We saw Mystere, which was fabulous. We even went retro and saw Folies Bergère, which I don’t recommend despite the fact that there were lots of topless girls in it (late show only). Normally, topless girls is a sure sign of great entertainment, but I felt bad for these young women since they were obviously very talented dancers. The toplessness seemed very forced and superfluous, more-so even than in most Hollywood movies (I know, scary, huh?). The dance numbers were quaint and simple, reminiscent of a more innocent time. So it was like watching topless high school theater. Very unsettling (go see the early, family-friendly show).