Oahu Hawai‘i: “All expenses paid trip” turns out to be Advertising Club ruse. 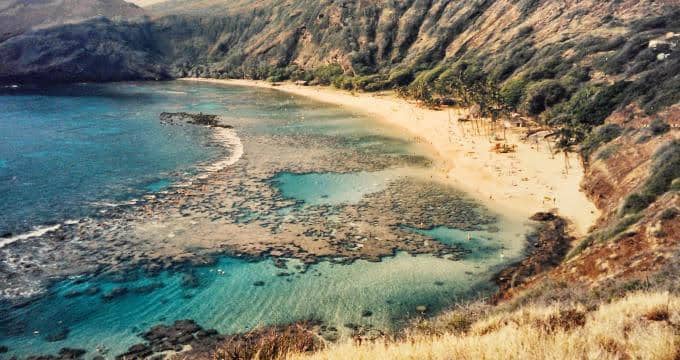 As many readers know, Amy and I are fans of the toasty warm places: Florida, Mexico, the Caribbean, etc. So when the chance for a free trip to Oahu presented itself, I pounced like a hungry cheetah on a weakened caribou. For some unfathomable reason, my name appeared on the Waikiki Ad Club’s wish list of judges for the Pele Awards (kind of like the Addy’s…except THEY’RE IN HAWAII! Yeah, baby!).

Oahu Hawai‘i is a nice place.

One can only guess why, but in keeping with my don’t-look-a-gift-horse-in-the-maw philosophy, I packed up a bag and dragged Amy to paradise for the weekend. My first impression of Oahu was that it was a very dark place, due possibly to the fact that we arrived at what was 3am our time Thursday night, or rather Friday morning. (Going out, it’s a six-hour flight. Coming back, it’s only four. Go figure.) A twenty dollar cab-ride later found us standing in the registration line behind the entire flight crew from Air New Zealand. A small eternity later, we found that they were training hotel personnel while we were doing our best impression of the walking dead. Thankfully, I didn’t have to be awake for another four hours.

Showered and dressed, but hardly awake, I wandered out of our hotel and stumbled next door to the Hilton Hawaiian Village where the advertising was displayed for our perusal. There I was introduced to my fellow judges: Steve Casey from Carmichael Lynch, Kevin Kehoe from Goodby, Steve Sandstrom from Sandstrom Design and two other designers whom I’d never heard of before and so can’t remember their names despite the fact that they seemed like good people.

They split us into two groups, design and advertising, myself in the latter. The only difference between the two groups was that the advertising judges had to sit through the TV. Surely we earned our free airfare with that Sisyphean chore.

The commercials fell into two basic camps: Almost and What-the-heck-were-you-smoking? A few of the spots were almost excellent and only fell short in a few areas. But most were wince-inducing, ill-conceived brain-farts of the terminally hackneyed or outright insane. And the print wasn’t much better.

In all, the three of us did roughly the same damage to Hawaii that the Japanese did December 7, 1941.

My wife enjoyed Oahu Hawai‘i more than I did.

So while I spent the first two days inside a sterile, air-conditioned hotel meeting room judging the Pele Awards, my meal ticket…I mean, wife, was evening out her tan at the pool of the Hotel Nikko Ilikai (or hitting on the cabana boys, for all I know). While I was anguishing over how I could justify giving some TV spot an award just because it wasn’t ENTIRELY awful, Amy was sipping cool, tropical, umbrella-shod beverages. While I was cringing at yet another heinous used car dealer commercial, she was feeling the cool south pacific breezes through her flaxen locks. She’s just lucky she makes more money than me…

In a random stroke of fortuitous luck, our trip to the island coincided with the 50th Anniversary of the ProBowl. Subsequently, the hotel where we were judging, the Hilton Hawaiian Village, was crawling with athletes and sports personalities including, but not limited to: Joe Montana, Howie Long, Ronnie Lott, Marcus Allen, Jim Kelly and Chris Berman. Their presence also brought out a bevy of bikini-clad groupies and their better-looking younger sisters, who brought their even better-looking best friends. We first noticed them while judging the radio commercials, historically the most painful medium to judge (it was), at the hotel pool bar listening with Sony Walkmans and frequently had to rewind the tape and start over.

After crushing the creative’s hopes of raises and career advancement, I joined Amy and spent the remaining two days assuaging my guilt by enjoying the beauty of Oahu and all of its many bars and lounges. When we weren’t marveling at how the balmy breezes tickled our armhairs and made them blow in funny patterns, that could have been just me, we were doing the obligatory trip to Diamondhead, the blowhole thing and the North Shore.

Oahu Hawai‘i in a nutshell.

Oahu Hawai‘i was all undeniably spectacular, but outside the occasional volcano, not any more amazing than Florida, really. Sure it sounds more exotic, but since the locals spoke English, there wasn’t much of an “other country” kind of feel to the place like you get in Mexico, Jamaica or say, Miami. They even had Kentucky Fried Chicken, for cripe’s sake.

Probably the weirdest thing about Oahu Hawai‘i was the eerie, claustrophobic feeling it gave me every time I thought about the fact that I was 2000 ocean-covered miles from the next nearest land mass. I mean, I can swim and all, but come on, that’s more than I care to exert. It seemed entirely plausible that, in much the same violent manner that the island jutted out from beneath the waves in the first place, it could just as violently be sucked back under, drowning us and essentially ruining the whole trip. Naturally, buying a place on the island, even if we could come up with the $350,000 median cost of a single-wall constructed shack, seemed like so much tempting of the gods.

Oahu Hawai‘i is inarguably breathtaking, but it comes at a steep price. The idyllic Hawaiian Islands are doubly cursed with the nation’s highest cost of living and some of the nation’s lowest wages. Industry is making a beeline for the exits like somebody yelled “fire”. Even Dole® is shutting down its pineapple farm because it can’t compete against the cheap labor abundant in your third-world countries.

The result is an economy that relies solely on tourism, much like Mexico (and we all know how well they’re doing). 60% of its workforce, when they aren’t calling in sick to go surfing, work in tourism. The other forty percent work in high-end retail shops like Prada, Gucci and Versace selling outrageously priced fashions to outrageously wealthy Japanese tourists.

Hawaiians need to find something to make or do, because otherwise the hotels rates are just gonna keep going up until even the Japanese can’t afford to stay there. Apparently, the demand for Macadamia nuts isn’t enough of a hedge against inflation.

And after my little trip, I can safely assure you, their advertising industry isn’t gonna save them.

I also got to judge the International Andy Awards. That sounds better than it was. All we did was weed down the stack for the REAL judges, so they could go to Costa Rica and sip Margaritas. Lucky scumbags.