Munich, Germany is home to high-tech business and high-octane beer. 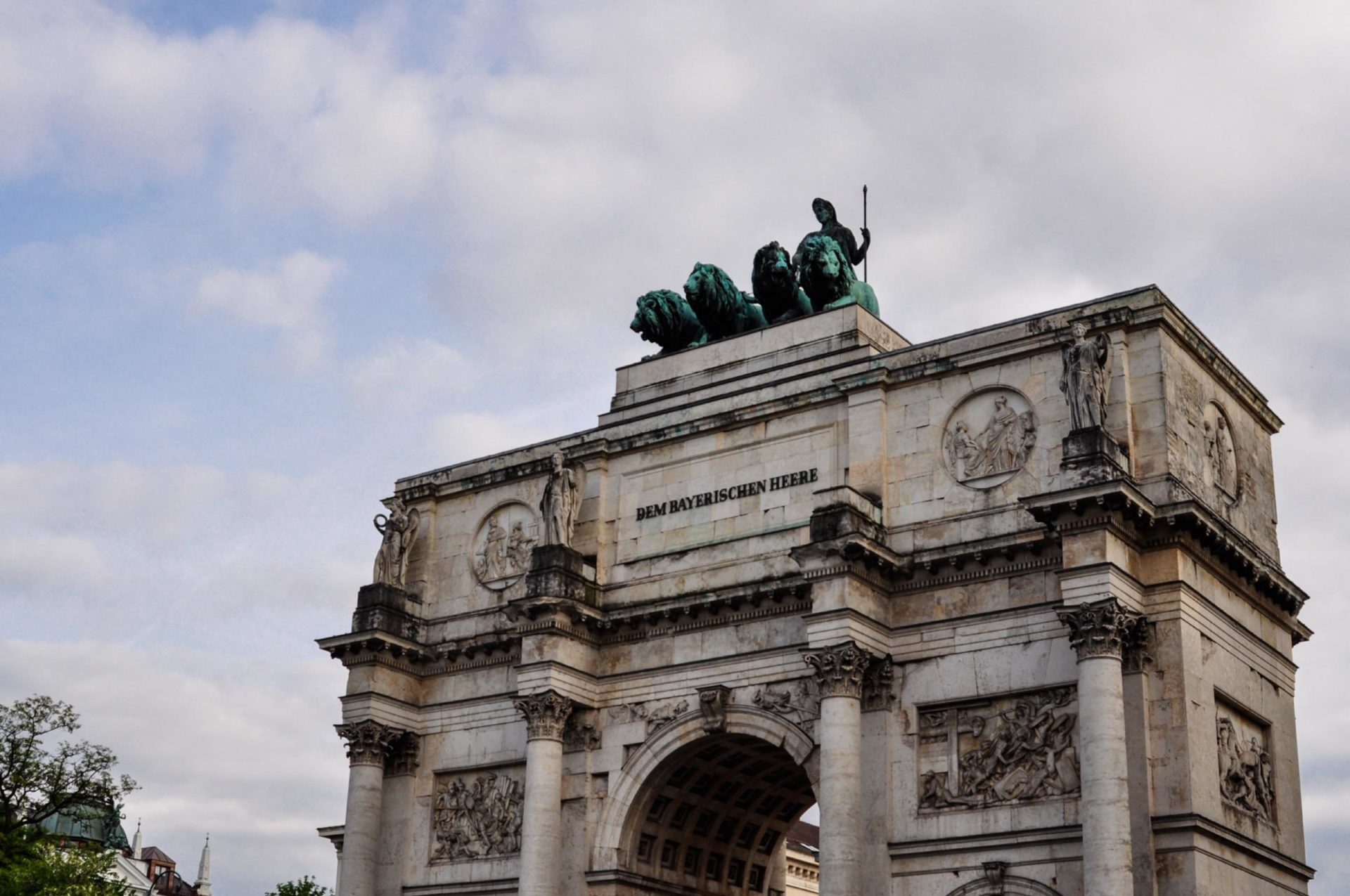 Munich Germany isn’t one of the country’s more well-known cities, at least not in America. Most Americans are only familiar with the cities they’ve heard mentioned on the “Hogan’s Heroes” TV series (like Berlin and the hilariously named Düsseldorf), or the cities that inspired picnic foods (like Hamburg and Frankfurt). Oh, sure, Munich had a moment of fame in 2005 with the movie of the same name by Steven Spielberg, but not many Americans watched it.

Munich Germany is where Hitler gave up on his dream of being an artist.

München, better known to English-speakers as “Munich,” is the Bavarian city infamous for “The Beer Hall Putsch,” a failed effort by the early Nazi Party to seize power (and not a 1920s swing-dance craze like it sounds). It was Hitler’s first attempt at “professional dictatoring,” and it did not go well.

Hitler’s botched revolt—which I can only imagine went off comically like an episode of “Hogan’s Heroes”—resulted in Adolf’s immediate arrest and a 5-year prison sentence, of which he only served a paltry nine months.

That PR disaster should’ve been the end of his nascent political career (and the Nazi party) but, as we all know, Hitler wasn’t a quitter.

Still, don’t hold this one, inauspicious “claim to fame” against Munich, Germany—it happened a really long time ago.

Visiting the city these days, you’d be hard-pressed to know that this quaint, old world hamlet was once the political breeding ground for the 20th Century’s biggest a-hole.

Munich is famous for beer and drinking it.

Among its lesser known accolades, Munich is the third largest city in Germany. It’s located in the southeastern state of Bavaria so it’s the country’s warmest city, too.

And that might explain why its 1.5 million citizens—who, despite being German—seem so darn happy all the time.

Either that, or maybe it’s all the beer.

München is home to Augustiner-Bräu Wagner KG, the local brewery first founded back in 1328. Its tasty Lagerbier Hell—which strictly adheres to the Bavarian Purity Law—consists solely of water, barley malt, hops, and a 5.2% kick in der kopf.

True to all those time-honored German stereotypes and clichés, Munich was awash with public drinking, day and night—in fact, every restaurant and bar we visited sold us either beer or wine, whenever we asked, at all hours of the day. It was disgraceful (from what we can remember).

The German food in Munich was very authentic (I assume).

Most of my meals consisted of Augustiner Beer, pretzels, and some form of cured, cased meat and meat by-products. Despite knowing about sausage’s carcinogenic super-powers, we nonetheless threw our better judgment out the window and didn’t skimp on the stuff—the grilled bratwurst was particularly delicious.

One of Munich’s culinary treats was the much-touted, yet boiled Weisswurst (or “White Sausage”), a traditional Bavarian sausage made from minced veal and fresh back bacon.

The sausage arrives in the very water they boil it in and looks fairly disgusting (see photo), but when you remove the sausage casing (because you’re not supposed to eat it), it becomes even less appealing.

By far, the pretzels were the culinary standout—without a doubt, the best I’ve ever had. They reminded me of the bagels we had in Montreal, Canada, which are even better than NYC bagels (yes, yes, it’s heresy, I know).

Unlike the horrid American pretzel—one of which contains 20% of your RDA of sodium and Type-2 Diabetes—German pretzels are more like a delicious kind of bread, so we cargo-loaded like we were about to summit the Alps.

When we got tired of eating like Germans, we ate like Italians. With München only a 30-minute drive south to the Alps and another 30 minutes to Milan, Italian was the next nearest local cuisine.

Unsurprisingly, Italian restaurants were everywhere. We had lunch at Lady Tigella, and dinner at il Grappolo (try the Amarone) and L’Osteria; all three were pretty good considering the chefs were probably named “Heinrich” or something.

Architecturally, München has it all (for better or worse).

Cuisine wasn’t the only outside influence you could see in Munich.

Given its 900-year existence and proximity to other European countries, it was inevitable that forces from nearby countries would one day storm across the Bavarian border and invade the city’s skyline.

There were lots of architectural similarities to other European cities but, not being an expert on the subject of architecture, I have no idea which way the influence flowed: Did the Germans influence the French? Or vice-versa?

Munich Germany’s massive, multi-block buildings certainly reminded me of building’s I had seen in Paris, France, while a few of Munich’s decaying Eastern Bloc eyesores reminded me of shit-holes I’d seen in Detroit.

The Gothic Frauenkirche cathedral, with its iconic twin towers, is the tallest building in the inner city because the Bavarian king decreed it—probably so some condo development wouldn’t block his primo views of downtown.

The Neo-Gothic New Town Hall houses the Rathaus-Glockenspiel, a weird diorama of mechanical figures acting out stories from German history three times a day that likely involve burning forest witches and eating lost step-children, though we never actually saw it in action.

The Peterskirche Church (aka, St. Peter’s Church) is a hodgepodge of every architectural style known the man — Romanesque, Gothic, Renaissance, Baroque, and H.R. Giger.

Its construction and subsequent renovations look like they were overseen by some priest with a cocaine habit and ADHD.

The Münchner Residenz, where the Bavarian royal family somehow “got by” with only 130 rooms and ten courtyards, is completely insane—during the hour we spent touring it, we only saw half of the place, and we ran the whole way (until security tasered us). Honestly, you couldn’t imagine a larger structure.

Luckily, you don’t have to imagine a larger structure, because those crazy Bavarians built one. In 1664, they started construction on the Nymphenburg Palace as a “summer place” for the King. Apparently he had serious Memorial Day parties, because the place spans 2,000 feet in width and occupies 400 acres of land. Gott im Himmel!

Despite its impressive history, the city of Munich isn’t trapped by it. Today, it’s a delightful mash-up of old world Bavarian charm and high-tech business and industry.

In fact, it’s the “Silicon Valley” of Germany. That’s because Adobe, Cisco, Google, HP, IBM, Intel, Oracle, and others are helping to send property values soaring (€4,000 per square meter) straight through the country’s solar-paneled roofs.

Much like other thoroughly modern European cities, München has a reliable and punctual mass transit system throughout the city that saved us from taking shockingly expensive cab rides (see below).

We took the S-Bahn S8 train from the airport for a mere €8 versus the €60 a taxi cab driver wanted. To save even more, we bought a Day-Pass on their MVV tram for another €6 and took it all over Munich — it’s a very walkable city, to be sure, but not after thirteen Augustiner beers.

Getting around in Munich Germany can be a rush.

If you want to save even more money — and you lack the gene for self-preservation — you can ride bicycles like the locals.

Germans drive on the correct side of the narrow, twisting Medieval roads, but the average tourist’s odds of getting nailed by a BMW still seem dangerously high.

BMWs are so common around town, you’d think the company was based here! (What? It is? Oh. Well, that certainly explains the BMW Museum.)

Yet despite the dangers, bicycles are nonetheless wildly popular in Munich. And, for reasons I could not fathom, they’re also frequently left unlocked — riders simply abandon them along the sidewalk and streets as if they were shopping carts. I don’t know why people don’t just steal these free bikes, but I imagine it’s because Germany still has Medieval laws on the books and a bunch of fully operational dungeons.

Munich has tons of beer gardens and real gardens, too.

One of the more popular — and eminently safer — places to ride a bike in Munich is the Englischer Garten (or “English Garden” for you twits). With almost 50 miles of trails, it’s one of the largest urban parks in the world.

We walked around inside a bit and saw the man-made waterfall, but somehow completely missed the freaking 7,000-seat beer garden! Luckily, we had already managed to hit two of the Top Ten beer gardens: the Viktualienmarkt and Augustiner Keller.

The beer garden is such a quintessential German experience that it’s hard to believe that they’ve only been around for two hundred years. In 1812, Bavaria’s royal booze-hound, King Maximilian Joseph I, decreed that both beer and food could be served together, forever blurring the line between bars and restaurants.

As such, the German beer garden is the direct descendant of such fine establishments as Hooters (Thanks, Max!). Truly, beer gardens are one of Germany’s finest traditions. And they almost entirely make up for the whole lederhosen thing. I said, almost.

Three days is not enough to see all Munich Germany has to offer.

Over the course of our whirlwind three-day stay in Munich/München, we found a lot to like about the place. The people couldn’t have been nicer — nobody once gave us crap about not speaking their needlessly long-winded tongue-twister of a language.

The food was amazingly good considering it was predominantly sausage-based. The beer was top-notch (we certainly drank enough of it to know for sure). And the city itself was beautiful, inviting, and yet surprisingly absent of vomit and urine.

All in all, I’d have to highly recommend the place. Everyone should visit the city of München, Germany — even if you’re not on a business trip.