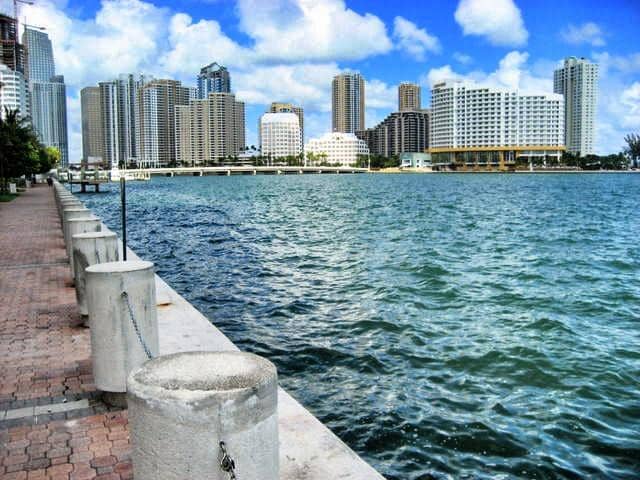 While living in the Tampa Bay Area, my girlfriend and I decided to drive to Miami and Key West on a lark (but we actually drove on a highway, as most larks were jammed with rush-hour traffic). It was to be a four-hour trip to Miami and Key West. A very romantic weekend getaway, assuming we didn’t get murdered while we were there.

We drive south to Miami and Key West.

Miami isn’t nearly as dangerous as most people had led me to believe. Oh, sure, on a past trip I took a wrong turn and ended up in an area that would’ve given Chuck Norris nightmares. But Miami’s South Beach area with its Art Deco architecture was glamorous and inspiring. I felt like Michael J. Fox in one of those Back To The Future sequels. The nightlife was energetic and exciting, including activities I haven’t taken part in since college (due to stricter indecent exposure laws).

Yeah. And pretty badly, too. But at least I wasn’t driving while I lapped up the ethanol like an old Buick. We had a drink in nearly every bar on Ocean Drive, and a couple of back roads. But on this noble quest, we inadvertently stumbled into a gay bar. (Due to our condition, a bouncer handing out condoms wasn’t enough of a tip off—no pun intended.) No, we had to wait until our eyes adjusted to the dark before we could detect the utter absence of estrogen.

In one bar (the “Glam Slam” or something like that) we ran into another problem. My date, turning her back to the bar, got her hair a tad too close to some tall candles. Fortunately, even through my alcohol-induced haze I knew that—the last time I checked—she wasn’t wearing a bright, yellow hat. That observation turned out to be correct.

Instead, her head was on fire and, since I really don’t find the Sinead O’Connor-look all that comely, I extinguished the blaze by smacking the back of her head. After two or three people lit their cigarettes off of her burning hair, the blaze thankfully went out.

Evidently, this was the third time this had happened in that bar, so the bar was offering a herbal-gauze wrap to the 100th burn victim—you can bet we’ll be back soon.

We drive further south to the Florida Keys.

We continued south to Key West, where we stayed at a (once again) charming Art Deco hotel, in what was possibly the smallest room ever meant for human habitation. It was so small, it made my apartment look big. We had to step outside to change our minds! (Ba da BING! Hello? Is this thing on?)

In recent posts, you may recall my aversion to moistening even a toe in saltwater due to the proliferation of living organisms that outweigh me by several hundred pounds and have gigantic teeth. Well, I decided to throw my better judgment overboard and dive into the briny deep with nothing more than a face mask and a pair of floppy, feet-extensions (like mine aren’t big enough).

One of the few glitches in this plan hinged on the fact that, for some reason, I thought that I would be able to see underwater without my glasses. This ultimately turned out for the best, because I missed seeing two barracudas and a nurse shark.

Now, you may think that a nurse shark doesn’t sound too bad, but anything that gets the name ‘shark’ tacked onto the end of its name is something I avoid like self-inflicted bullet wounds. And since while snorkeling there is a distinct possibility that in a panic—such as the one eying a shark would’ve thrown me into—one can swallow your body weight in saltwater.

Oh, yeah, and there’s also a chance of that drowning thing, too. I was able to see a manta-ray, which was really cool, though still blurry. (Luckily, I’d seen enough Jacques Cousteau to know what it looks like in focus, so I was able to make the leap in my mind.) There were a lot of brightly colored, round things swimming between my legs that I took to be fish as well. It kinda felt like I was in a big saltwater aquarium, only without the fake plants, plastic skeleton, or the that clam-thing that opens and closes its mouth all the time.

We try to drive even further south but, you know: water.

The rest of the trip involved mostly shopping. Not because we wanted to, but because it was the only thing to do. The main industry in Key West appears to be reef-diving and selling t-shirts. And every store sells the same designs. (These guys have obviously never heard of a USP.)

The drive home through the everglades was pretty uneventful. Not a single alligator chased down or attacked our car. So we didn’t get the chance to have our pale, dehydrated bodies dragged screaming and clawing into the murky everglades. We were kinda bummed. (Maybe next time.)