Cusco Peru: Not everyone who lives in the Andes Mountains crashed their airplane. 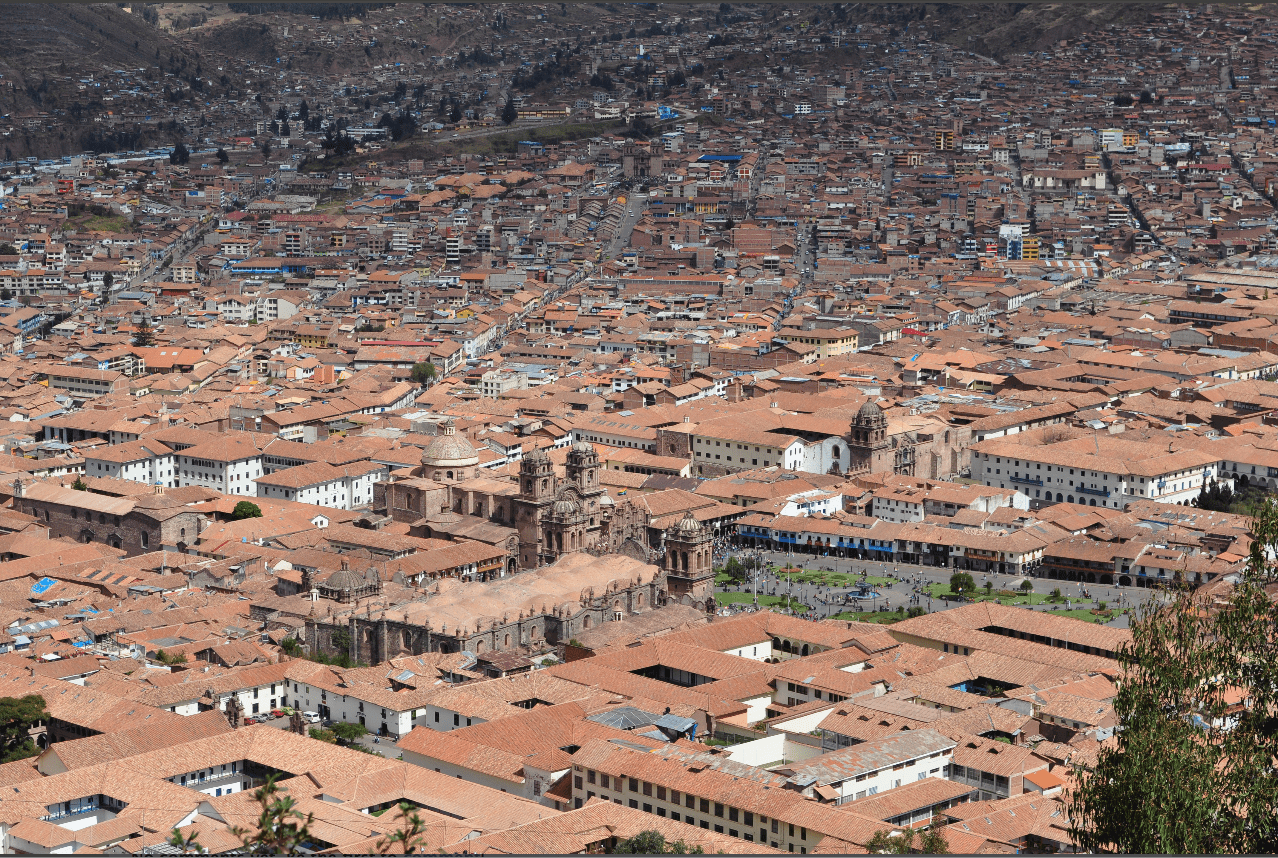 Cusco Peru lays within the the Andes Mountains, the world’s longest continental mountain range at 4,300 miles. Running North to South, they cut directly through the middle third of Peru, separating the county’s interior rain-forest from its coastal desert. The Incas thought the Andes was the perfect place to build Cusco. Of course, they were hopped up on coca leaves most of the time.

Cusco Peru is a sky city in South America.

Cusco, Peru is a city of almost 400,000 light-headed people living at 11,200 feet in a valley plateau. It was the original capital of the Inca Empire for hundreds of years, and it’s easy to see why.

Yet even if you somehow found Cusco Peru and lay siege to the place, YOU’D probably starve long before the citizens of Cusco would. It has everything you could want (except maybe oxygen).

Being near the Urubamba Valley, Cusco is almost an entirely self-sufficient ecosystem, with almost limitless glacier-fresh spring water, llamas, guinea pigs, fruits and vegetables — it would be years before they needed something from the outside world. So the Incas no doubt thought they were safe from almost any threat. Sadly, they were wrong.

Pro-tip: Don’t bring a spear to a rifle fight.

Rather anti-climatically, the entire Inca Warrior Nation got taken down by a Spanish force of about 400 (it took only 40 to take Cusco, itself). The Incas were simply not prepared for the Conquistadors’ superior warfare technology and Smallpox resistance (in all fairness, the Incas were also exhausted from a recent battle with rival tribes).

Still, the first encounter must have been just as surprising for the Incas to face rifles, armor and horses, as for the Spanish to face spears and loincloths.

Needless to say, the leader of the Spanish expedition, Francisco Pizarro, quickly subjugated the Inca Nation, plundered and melted down their gold religious art and shipped it back to Spain in bars.

The Spanish were not good winners in Cusco Peru.

Then, they tried, and largely succeeded in, wiping out the Inca’s sun-worshipping religion and turning everybody Catholic. So today, Cusco Peru is chock-a-block with European-looking churches built on nigh indestructible Inca stone foundations and, of course, Catholic masturbatory guilt.

Our flight on LAN left late, but since we didn’t crash into the Andes Mountains nor have to resort to cannibalism, we called it a win. Stepping off the plane, we were immediately aware of the city’s 11,200 foot altitude.

Turns out that humans living in Cusco Peru need oxygen to live.

Everything was so exhausting that it made us seriously weigh just how badly we needed something before exerting the required effort—breathing we decided, was worth it, but not much else.

To be on the safe side, we’d been taking altitude sickness pills yet, except for getting more winded than an asthmatic bulldog, we didn’t have any serious issues with the altitude.

The coca tea—made from the same plant used to make cocaine—really helped (or at least, we thought it helped). Coca seemed like a cure-all for any and all ills, so we chewed it for everything from hangovers to hangnails.

Conveniently, our hotel kept a big pot of coca tea readily available in the lobby, and we drank it every chance we got. In fact, I really kinda miss not having it now…you know? Man, I’d KILL for a hit of that shit right now! Does anybody have any cocaine? Look, I’ll pay you! I’ll pay you ANYTHING!! Wow, is it WARM in here?!?

The existence of Cusco Peru is an amazing feat.

It’s amazing that a civilization the size of Cusco could even exist at that altitude, much less have roads, buildings, churches, and homes. Yes, there’s even a Starbucks…(I said it was civilized, didn’t I?) How they got earth movers up in the mountains—when the only road is a hellishly twisting series of switchbacks—is almost as impressive as Machu Picchu itself.

Peruvian food is really good and you should eat some.

The city quite resembled a European city, with narrow cobblestone streets, wide, open plazas, and beautiful fountains. Our hotel, another Casa Andina Private Collection — not to be confused with the Casa Andina Select, Casa Andina Classic or even the Diet Casa Andina — was first-rate except for the room’s portable radiator which was incapable of generating enough heat to toast bread. Though the hotel was only a few blocks away from Plaza de Armas (“Square of the warrior”), walking there was no minor feat at that altitude.

We had a tremendous lunch of alpaca tartare (or was it carpaccio?) at the Inka Grill, a pretty good restaurant in Cusco. The local cuisine was much more multi-cultural than we expected with influences from Italy, China, and Japan.

We tried native dishes like tacu tacu (rice mashed with beans and spices), guinea pig (tastes like gamey chicken) as well as sushi and pasta, most with a side of potatoes as they have hundreds of kinds, in hundreds of colors like white, orange, green, purple and probably florescent.

Following the meal, we shopped for something made from the llama-like Alpaca we’d just eaten. While Amy shopped for a woolen sweater, I hung out in the sunny, cool mountain air getting propositioned by young Peruvian girls offering me massages for $10 an hour. Unfortunately, they seemed like legitimate businesses, so I told them “No” (but in Spanish). Once back at our hotel, we literally passed out from the exertion of simply being upright for more than a few seconds.

The Spanish built huge Catholic churches to be dicks.

The next day, we took a tour of Cusco and saw Iglesia de la Compañía de Jesus. It was built on the indestructible foundations of a former Inca palace and packed with beautiful Renaissance-era art that local artists were forced to create against their will. As a result, the church is considered one of the best examples of colonial baroque style in the Americas.

The Cathedral of Santo Domingo, built on top of the Inca temple Kiswarkancha’s foundation, has an interesting exhibit of Incan astronomy showing their early knowledge of the Milky Way and their unique take on constellations — the Inca constellations weren’t identified by linking certain stars as the Old World did, but from finding their gods’ silhouette’s within the dark gaps of the Milky Way.

This Incan fortress in Cusco Peru is named “sexy woman.” Sort of.

We next drove up to an ancient fortress/temple overlooking Cusco at Sacsayhuaman (pronounced similar to “Sexy Woman”) which was built — complete with an aqueduct system — by the pre-Incan Killke culture.

The stones here were the biggest ever used in the Americas and were cut with a freakish precision found nowhere else — not even a blade of grass can fit between the blocks.

Back in the plaza, we got to witness a parade celebrating Corpus Cristi (“the body of Christ”) which blocked off the main square.

There were groups from all the local churches in native dress followed by bands of musicians who sounded drunk, but weren’t. We watched for as long as we could remain upright and then headed back to the hotel to sleep some more. The next day, we headed to the Sacred Urubamba Valley.