The collaboration myth of the Open-Plan office. 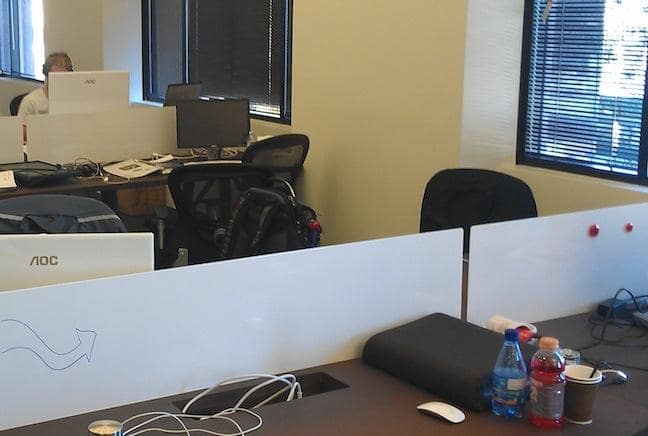 The reality for those relegated to these privacy and “Feng Shui”-absent open plans is quite different than the sales pitch — instead of “fostering collaboration,” the open plans foster annoyances, resentment and employee defections en masse.

The reality for those relegated to these privacy and “Feng Shui”-absent open plans is quite different than the sales pitch.

Instead of “fostering collaboration,” the open plans foster annoyances, resentment and employee defections en masse. Think I’m kidding? Here’s a quote from Scientific American’s article: Wall-free office spaces did not quite work out the way their utopian inventors intended.

Although open plans do have advantages in fostering ambient awareness and teamwork, a meta-analysis found that they cause conflict, high blood pressure and increased staff turnover.

Problems arise because there are basically two types of employees: Employees who talk on the phone frequently, and ones that don’t. Open plans are hell for both.

Talkers are forced to either not care that they’re interrupting everyone elses’ train of thought. Or to constantly look for a free conference room.

This isn’t a big problem if there are an equal number of conference rooms and talkers. But it’s a huge problem when that’s not the case.

Without enough conference rooms, your highly paid staff is reduced to wandering the halls disturbing other people who are trying to work — I’ve seen people forced to actually leave the building to find a quiet place to talk. All of which undercuts any productivity gains from so-called collaboration.

Non-talkers, on the other hand, produce less work too, because they’re constantly being disrupted by the talkers. So they’re also forced to seek out quiet places, further exacerbating the problem of conference room usage.

How Open floor plans could work.

The open plan only works when no one talks, ever. As such, it’s really only ideal for librarians and computer programmers. Or maybe not:

I am a computer programmer and I have never been able to work without walls. The distractions, visual and aural, are impossible to block out in any sort of an open environment. For years I have worked nights and weekends and even in stairwells just to be able to concentrate.

Open floor plans can work acceptably for small, tight-knit groups if there are a lot of conference rooms and a limited number of employees. (To avoid impeding your employees’ productivity, I’d recommend an employee-to-conference room ratio of approximately 5:1.)

From my observations, the open plan system breaks down quickly for groups any larger than the Brady Bunch. As your company grows, it quickly becomes counter-productive because — by having both a huge bullpen AND tons of conference rooms — you’re actually using up MORE space than a conventional office arrangement would.

And let’s not discount the very real, psychological advantages of having your own personalized, walled space, even those epitomized by the lowly cubicle:

Cubicles block peripheral vision for a concentrating worker preventing the subliminal detection of threat movement and a massive number of failed attempts to trigger the vision ‘startle reflex.’

In other words, walls help workers focus. And focus, not sociability, leads to productivity. Doesn’t it seem like you’d want to encourage that since productivity is what you’re paying employees for?

Basically, it all comes down to the fact that one solution doesn’t fit all types of work — the Open Plan may “work” for some, but it’s no magic bullet.

UPDATE #1: Here’s another good article debunking this nightmare. Offices For All! Why Open-Office Layouts Are Bad For Employees, Bosses, And Productivity

UPDATE #2: Here’s yet another article on the myth of the Open Office floor plan. New Yorker Magazine: “The Open-Office Trap.”