I didn’t realize that I was afraid of fish. 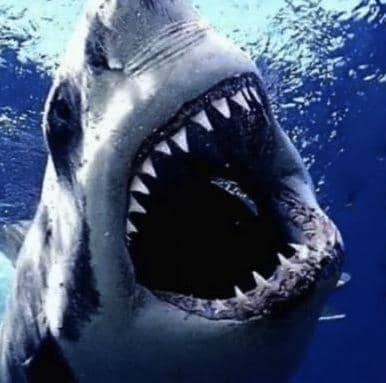 Around here, fish are really big. It seems like they grow a lot bigger in the ocean than in freshwater lakes up north. There’s 3-feet long fish with huge teeth swimming around in little inlets and canals. Fish with teeth. And people wonder why I don’t scuba dive. What did I just tell you? Fish with teeth. It’s kind of scary. And the fish aren’t even what I worry about. Tampa Bay has the third largest concentration of sharks in the world (after the Great Barrier Reef and someplace in Australia). Yes, you read that correctly. S-H-A-R-K-S. Now, sharks I’m told, have teeth as well. Only big teeth. Really big teeth.

This may appear odd to you, but I now live in a state where sharks swim freely without proper identification papers or visas. No immunization shots are required. No flea collars. No curfews. Nothing. For some strange reason, sharks–one of nature’s finest killing machines– are allowed to prowl around at will. And, in all the recorded cases of shark attacks, there has NEVER been a conviction. It’s unbelievable! At least some people have the right idea. An art director at another agency invited me to participate in controlling the population of these dangerous denizens. And being the socially conscious sort, I leapt at the chance to rid the fine, overdeveloped, vacationland that is Florida of these squatters and interlopers.

He called it "fishing", and it involved a long graphite "rod" with what he called a "reel" attached. A device that wound up a nylon line. The line was stretched out from the rod to its tip and down to something appropriately called a "lure". The lure is by far the best part of this setup. It looks very much like a smaller fish, except that it conceals a razor sharp hook.

By projecting, or "casting", the lure with its attached line out into the ocean and slowly winding the line back into the reel, fish are fooled into thinking someone rang the lunch bell and they devour the lure. Once that happens, we jerk abruptly back on the rod and rip the hook into the fish’s jaw, rendering him effectively really ticked off. Then we reel him in and display him for the losers twenty feet down the pier who wasted their money on shrimp for bait and haven’t caught squat, but now have to explain to their wives what happened to the appetizers for the PTA meeting.

In New York, if a fish was too small to keep legally, or there was a high probability that you’d get caught, we’d throw him back. But this is Florida. And these fish have teeth. So, we’d toss their little slimy, flapping carcasses to the salivating pelicans nearby, who would pause temporarily from taking dumps all over the pier to scarf them down like diet pills at an Overeater’s Anonymous meeting.

For those of you who can tell the difference, we caught grouper, flounder, jack and silver trout. Flush with victory, we cut their heads off and made hand puppets.