I am NOT stalking Don Johnson. No, seriously. 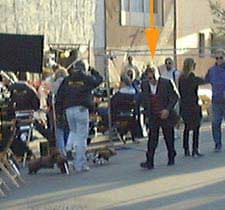 Did I mention that I’m stalking Don Johnson? Well, I’m not. It’s just a massive coincidence that I used to live in Miami where he shot Miami Vice and that now he lives in SF shooting Nash Bridges. Really, it is. I mean, sure he’s still good-looking, but c’mon….

Don Johnson seen here (under subtle orange arrow) headed back to his limo to escape the angry mob of drivers who can’t get to their garages.

Actually, it seems like they shoot most of the show on the street we live on. It’s weird. This is probably the eighth time his crew has been filming at the coffee shop on the corner. They block off the street, set up the lights and the scene and then he and Cheech are limo’d in and they do the scene. Then they jump back in the car and drive off.