How to screw your satellite or cable company out of $10 a month. 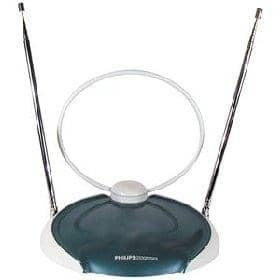 As long-time readers know (are there any of those?), I hate paying AT&T any more than I absolutely have to. (Especially now that the company jacked up my DSL bill just “because it can…”) Still, I wanted to get High-Definition programming somehow without paying them another $10/mo. for the privilege…

So when I read that I could get High-Def channels over-the-air for free, I ran out, bought a Phillips antenna at Target for $49 and hooked it up to my HDTV (you must have a TV with a built-in HDTV tuner for this to work, check your manual). After a few minutes of scanning, my HDTV tuner found numerous local channels of HD—28 of them in fact.

Granted, not all of them are useful to me (six are either Chinese- or Spanish-language), but I get most of the major networks—ABC, NBC, CBS and FOX come in fine and clear. The CW and a few local channels come in more intermittently, which is okay since I only watch them that way, too.

The only problem is that I’ll have to watch TV live. (I mean, who does that anymore?) Luckily, the only shows that really benefit from HD are the ones you almost have to watch live, like LOST.

But the real reason I even bothered to get the antenna was for the NFL. Yeah, baby. Cuz Football goes with high-def like Nuns go with butter (I may have heard that analogy wrong…).